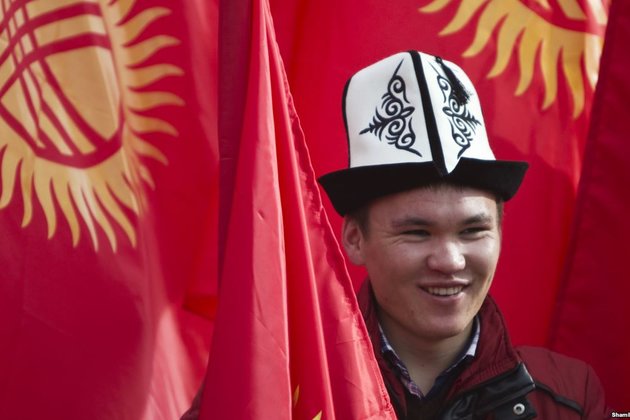 The kalpak, the traditional Kyrgyz hat, is tipped to become a national cultural symbol.

A bill that would officially raise the kalpak's status is widely expected to be approved by lawmakers in the next few days.

The bill makes the felt hat -- also known as the 'ak kalpak,' or white kalpak -- an official symbol 'alongside the country's national flag, coat of arms, and national anthem.'

If approved, it would become compulsory for the president, the prime minister, and members of the cabinet and parliament to wear the hat during foreign visits and official events.

The bill also recommends that athletes and others representing Kyrgyzstan in sports or cultural affairs at home and abroad sport the kalpak during official ceremonies.

People wear kalpaks and carry a giant one and national flags during a rally on Flag/Kalpak Day in Bishkek on March 5, 2016.

The document describes the kalpak as an 'important element of the cultural heritage of the Kyrgyz nation.' If it becomes a national symbol, disrespecting the kalpak would be illegal and offenders could face a fine or up to a year in jail.

In December 2017 a pet owner caused public anger when her Shiba Inu, a Japanese dog breed, appeared at a Bishkek dog show wearing a kalpak.

The bill tasks the government with ensuring the proper use of the kalpak and to control its production, import, and sale.

Kalpaks must be made from 'only from natural felt using pure wool,' the document states.

The kalpak has been worn by Kyrgyz men of all ages and social standing for centuries.

According to Kyrgyz tradition, the kalpak must be treated with respect. For example, it should not be placed on the ground or near someone's feet.

In 2016, when the honorary day was introduced, a group of Kyrgyz students made a 3-meter-high kalpak to take part in Kalpak Day celebrations in central Bishkek.

Farangis Najibullah is a senior correspondent for RFE/RL who focuses on Central Asia.