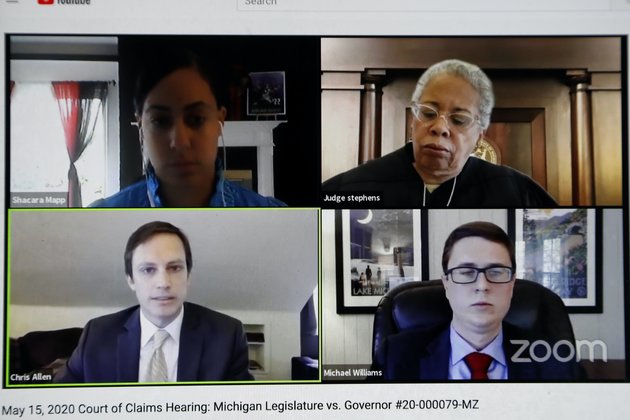 When COVID-19 was declared a pandemic more than a year ago, physical courtrooms across Canada and around the world closed, doing their part to slow the spread of the coronavirus.

In response, court proceedings at all levels went online using pre-existing platforms, including Zoom. This "new normal" will persist as long as the pandemic does, and some have even predicted there's no going back.

While the change has many benefits, it also raises many concerns, and courts must be prepared to address these issues to ensure the integrity and accessibility of the justice system.

Accessing Zoom court can be particularly difficult for self-represented and socially vulnerable litigants who find themselves on the wrong side of the digital divide with respect to access to technology, reliable internet access and the skills needed to negotiate videoconferencing technologies.

Broadband access is an issue in rural and remote areas of Canada, including many Indigenous communities. Even when the technical access issues are addressed, finding a quiet, private and safe place to attend Zoom court can be a challenge.

The problems don't go away once you've made it into a virtual courtroom. Trouble with cameras, microphones, backgrounds and filters can have embarrassing consequences for parties, lawyers, and judges - one example is the infamous "cat lawyer."

'You're not on mute'

In many of these instances, egos and, more importantly, the decorum of the court were most threatened. But there have been technical misfortunes with far more serious consequences.

An overheard remark by one judge about defence counsel, made when the recording was assumed to have paused, resulted in a mistrial in Toronto. In another Canadian case, a party giving evidence failed to mute her microphone. The subsequent statements heard by the court during an off-the-record break raised procedural and substantive concerns, leading to a request for a mistrial, which was ultimately denied.

Court security takes on new meaning - and new challenges - in the Zoom courtroom. They're vulnerable to what's known as Zoom bombing attacks, as in a virtual court hearing in Waterloo, Ont., that was interrupted by disturbing sexual and racist images.

Unlike in physical courtrooms where everyone involved in court proceedings gather in the same physical space, participants in Zoom court can attend from almost anywhere. Parties and even lawyers in legal proceedings have attended Zoom courts from odd and inappropriate locations, undermining the smooth functioning and solemnity of the court.

In other cases the risks and consequences can be much more serious - like when the defendant and victim in a domestic violence case attended Zoom court from the same apartment, raising immediate concerns about the safety of the victim and triggering an urgent police response.

There's also the issue of privacy. Even before the advent of Zoom courts, there were privacy concerns about the online publication of court records, particularly for vulnerable populations. With the advent of Zoom courts, these concerns have been exacerbated since it's become even easier for members of the public to satisfy idle curiosity by attending online court proceedings.

Some courts attempt to protect privacy by requiring non-lawyer participants in court cases to sign agreements stipulating they won't record or re-broadcast video or audio conference court proceedings. These agreements, however, do not apply to members of the public attending open virtual hearings, who can use undetectable screen-capture technologies to record courtroom interactions - recordings that can later be shared on various platforms.

Responding to the challenges

We've had centuries to develop the physical courtroom as the setting for court proceedings.

When COVID-19 forced courts to move online, the change happened in a matter of months - and involved repurposing existing virtual meeting platforms not specifically designed for court proceedings.

If virtual courts are here to stay, we must acknowledge and respond to the challenges presented by virtual courtrooms. They can never provide the human connection that has been a vital part of legal proceedings. Identifying and promoting best practices can, however, ensure virtual courts function as well as possible.

Addressing digital divide concerns is a critical first step - courts must ensure that all parties have appropriate access to communication technology and platforms. Courts should also take advantage of software features to ensure smooth functioning of the courts - for example, implementing waiting rooms and ensuring automatic muting of microphones and cameras.

Our justice system deserves nothing less than careful attention to all of these issues.