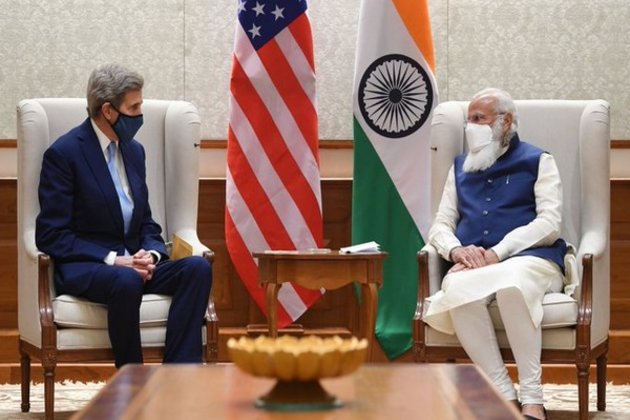 Washington [US], April 9 (ANI): US Special Presidential Envoy for climate John Kerry and Prime Minister Narendra Modi discussed US-India cooperation on addressing the climate crisis and pursue actions to collaborate on a 2030 agenda for clean and green technologies in the service of the planet.

Both leaders discussed US-India cooperation on addressing the climate crisis and raising global ambition heading into President Biden's Leaders Summit on Climate April 22-23, the 26th Conference of the Parties (COP26) to the United Nations Framework Convention on Climate Change later this year, and beyond, the State Department said.

According to a readout from the US Department of State, Kerry and Prime Minister Modi affirmed that given the two nations' "shared desire" to combat climate change and complementary strengths, the United States and India can creatively collaborate on a 2030 agenda for clean and green technologies in the service of the planet.

"Officials of the two countries will pursue ways in which they can deepen their partnership on climate and clean energy in this critical decade," the readout read.

"Special Presidential Envoy Kerry highlighted President Biden's support for the enduring comprehensive global strategic partnership with India and the importance of two of the world's largest economies leading together on climate action. Special Presidential Envoy Kerry shared that the United States supports India's ambitious agenda for climate action during the 2020s, particularly the target announced by Prime Minister Modi of installing 450 gigawatts of renewable energy by the end of the decade," it read.

The two leaders also discussed the need for ambitious climate action in this critical decade by all countries in line with their national circumstances to keep a Paris Agreement-aligned temperature limit within reach to avoid the worst climate impacts, according to the readout.

"Special Presidential Envoy Kerry engaged in roundtable discussions with business and civil society leaders, including a roundtable with women leaders in energy and climate change," the readout read.

Kerry on Thursday in a tweet wrote that the Paris Agreement recognizes the global need to further empower women in climate decision-making -- "that's why it was my pleasure to meet with women leaders driving climate action and the energy transition here in India. Thanks to @USISPForum for co-hosting!"He said that his meeting with the US-India Business Council had a "focus is on charting a path with India in pursuit of sustainable development and ambitious climate action." (ANI)