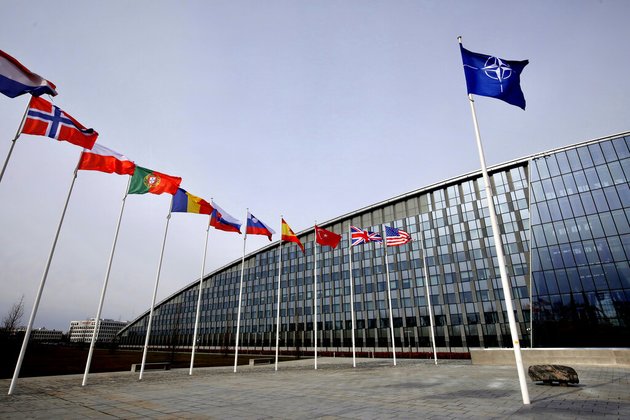 LONDON - As NATO marks the 72nd anniversary of its founding this week, the alliance faces new challenges and enduring threats.

Western allies have voiced concern over the buildup of Russian troops and military hardware along the border with Ukraine in recent weeks. Russian troops are conducting exercises in Crimea, a part of Ukraine that was forcibly annexed by the Kremlin in 2014.

Moscow said the deployments are aimed at ensuring Russia's own security and are "not a threat to anyone." But Ukrainian President Volodymyr Zelenskiy is urging NATO to accelerate his country's ascension to the alliance, saying that would send "a real signal" to Russia.

A Ukrainian serviceman patrols along a position at the front line with Russia-backed separatists not far from Avdiivka, Donetsk region, April 5, 2021.

It has been 72 years since Western allies signed the Washington Treaty to create NATO, based on the principle of collective self-defense against a perceived threat from the Soviet Union. That principle is enshrined in Article 5 of the treaty.

"The appeal by President Zelenskiy of Ukraine is a reminder that actually not only NATO remains the focal point of attention for countries that were former members of the Soviet Union and are desperate to escape from an enduring Russian sphere of influence, but also that the alliance is ultimately the only security structure in Europe that matters," Eyal told VOA.

"We have a Russia which is not only willing to use force in order to threaten other European countries but has actually used force and has forcefully annexed a bit of a territory of another country into itself as little as less than 10 years ago. So, it does underline the centrality of NATO as a security structure in Europe," he said.

FILE - Macedonian Army special forces participate in an exercise to mark one year of NATO membership, at the army barracks in Skopje, in North Macedonia, March 27, 2021.

That centrality continues to attract new member states to NATO. North Macedonia joined in March 2020. Bosnia and Herzegovina is an official candidate, with Ukraine and Georgia aspiring members.

"The arrival of President Biden in the White House has at a stroke removed all such doubts," Eyal said. "The president has a 40-year career track record in Congress in defending the alliance and in putting forward the argument that far from being a drain on American resources, the alliance is a force multiplier for the United States itself."

"Climate change cooperation as it pertains to security and defense," she said in a recent interview. "But even more broadly than this, technology. A new approach to Russia and China. A new approach to how democracy is promoted and protected against disinformation and against subversion campaigns."

Biden's reaffirmation of U.S. support has given NATO a timely boost in the face of its various challenges. These include ongoing violence in Afghanistan and stalled peace talks between the U.S. and the Taliban, which are complicating efforts to end the 20-year NATO mission in the country, launched in the wake of the 9/11 terror attacks on the United States.

Internal tensions are also simmering, not least over defense spending. Jens Stoltenberg, secretary general of NATO, highlighted the imbalance in a recent interview with Agence France-Presse.

"More than 90% of the people in the European Union, they live in a NATO country. But only 20% of NATO's defense spending comes from NATO EU members," he said.

The United States will likely maintain pressure on European members to meet the defense spending target of 2% of gross domestic product (GDP), made at the 2014 NATO summit in Wales, Soare said.

"President Biden was one of the architects of the Welsh defense pledge, so in this sense, he is very much attached to the idea that Europeans have to continue to invest more in their defense."

Meanwhile, Turkey has purchased a Russian missile defense system, to the dismay of NATO allies, while Ankara's bilateral relations with the U.S. and Europe are strained. Nevertheless, Turkey is unlikely to withdraw from the alliance, Eyal said.

"Even Turkey does not believe that it will be better off outside NATO rather than in the alliance. Although the relationships are awkward and difficult, the truth still is that there's plenty to negotiate about, and the United States and the Europeans have more leverage in talking to Turkey in military terms within the alliance than they would have had outside it," he said.

Analysts say despite the tensions, NATO remains the bedrock of European security as the alliance enters its 73rd year.