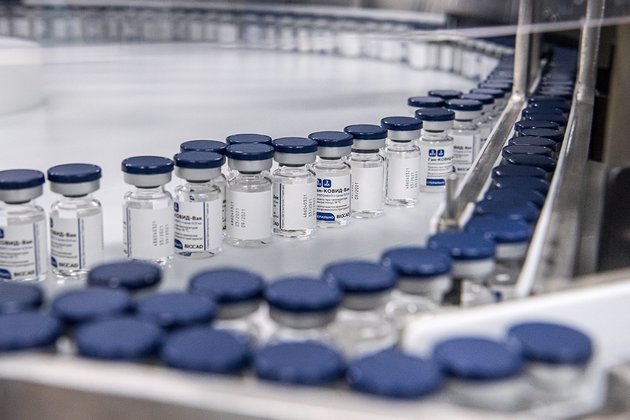 Vaccination of high-risk groups would begin within three or four days, state media reported on April 4. On March 28, Armenia received its first shipment of AstraZeneca doses from the Covax global vaccine sharing initiative. On March 31, the Health Ministry said that 565 people had been vaccinated, all with Sputnik V, Radio Azatutyun reported. Officials had promised that vaccinations for high-risk groups would start in mid-February.

Azerbaijan began its vaccination campaign on January 18 with Beijing-based Sinovac's CoronaVac, for which it has contracted 4 million doses. It has also been promised 506,400 doses of the AstraZeneca vaccine from Covax; the first batch of 84,000 were delivered on April 4, the Health Ministry said. Over 591,000 people have received one dose and 357,000 have received two, the government said April 5. President Ilham Aliyev has several times condemned what he calls developed countries' "unequal and unfair distribution" of vaccines. Azerbaijan is taking part in an experiment, along with Russia, Ukraine, and several countries in the Middle East, in which subjects will get a first dose of the AstraZeneca and then a second dose of Russia's Sputnik V vaccine. Russian peacekeepers in Nagorno-Karabakh were vaccinated in February, Armenian state media reported.

Georgia began its vaccine campaign on March 15 with 43,200 doses of AstraZeneca sourced through Covax. Another 29,250 doses of the Pfizer vaccine, also through Covax, arrived on March 25. People over the age of 55 became eligible on April 5. Reluctance is widespread, especially after a nurse died shortly after she received her first jab on television on March 18. Georgians were broadly hesitant even before the tragedy. One recent survey conducted prior to the nurse's death showed that over a half of Georgians were reluctant to get the jab. Prime Minister Irakli Garibashvili tested positive for COVID on April 6. President Salome Zurabishvili, who has received the first dose of the AstraZeneca vaccine, had been with him on April 3 and thus went into isolation. Georgia received 100,000 doses of China's Sinopharm vaccine in early April. "The level of safety and effectiveness of this vaccine is very high," Chinese Ambassador Li Yang told an April 5 press conference. Another 100,000 doses of the Sinovac vaccine will be gifted to Georgia, Li added. But officials say they will only begin using the Chinese vaccines after they are approved by the World Health Organization. The prospect of purchasing Russian medicine at taxpayers' expense has sparked some controversy in Georgia, where Russia is seen as an invader and occupant. Health officials have assured Georgians that the government has no plans to purchase Russian vaccines, but did not categorically rule out the possibility.

Clinical trials are ongoing for the domestically developed QazVac.

A small number of essential workers began receiving shots on February 1. On April 5, the Health Ministry reported that 174,300 people had received at least one dose, Vlast.kz reported. Prime Minister Askar Mamin said on April 6 that he hoped Kazakhstan would reach herd immunity with 10 million people inoculated by September, Interfax reported. Authorities announced on April 5 that the 60,000 people who had received two doses were issued digital vaccine passports that can be downloaded from the Egov-mobile app, Interfax reported The top doctor in Almaty said on April 5 that he expects a new wave of cases this month. In late March, Almaty was registering more cases than during the worst periods of 2020. Interfax reported on April 6 that military hospitals in Almaty and Nur-Sultan were being opened to COVID patients. A plant in the central city of Karaganda is producing Sputnik V doses under license. Kazakhstan, where neither of the Chinese vaccines is authorized, announced on March 26 that it would take 3 million doses of the Sinovac-produced jab. President Kassym-Jomart Tokayev received the Sputnik V vaccine manufactured in Karaganda on April 6, his spokesperson said.

Healthcare workers and teachers were the first to become eligible under Kyrgyzstan's vaccination drive, which began on March 29 with 150,000 doses of the Sinopharm vaccine donated by China. Initial interest has been low. Only 644 people had received a shot by April 6, the Health Ministry said. The country is negotiating the purchase of 500,000 doses of Sputnik V, which it hopes to receive by late May or June. Citing a sharp uptick in infections, First Vice Prime Minister Artem Novikov on April 5 called for hospitals to expand capacity immediately. Kyrgyzstan was supposed to receive over 500,000 doses of the AstraZeneca vaccine through the Covax program in March. In the middle of the month, the Health Ministry jettisoned that plan amid European concerns about adverse side effects. A survey by the Health Ministry with the support of the WHO found 55 percent of the population is willing to be vaccinated, Knews reported on April 6. The survey of 1,000 people found 18 percent reported having used antibiotics to prevent or treat coronavirus. Antibiotics do not work against viruses and misuse is dangerous.

Vaccinations began on March 22 with 192,000 doses of the AstraZeneca vaccine made in India, known as Covishield, received through the Covax program. There appears to be widespread confusion about the need for vaccinations after the government spent months claiming it had defeated COVID-19. There is also hesitancy about using the available shots due to AstraZeneca's controversial rollout in Europe. A Health Ministry spokesman told Radio Ozodi on April 5 that the government is negotiating the purchase of the Sinovac and Sputnik V vaccines.

Government officials insist no cases of COVID-19 have appeared in Turkmenistan, despite ample evidence to the contrary. State media rarely mention the pandemic, vaccinations, or any facet of the crisis. Russian officials said Turkmenistan became the first country in Central Asia to approve the Sputnik V vaccine, on January 18. Later that month, Ashgabat approved use of EpiVacCorona, also produced by Russia. It is unclear how many people have received a jab. Amsterdam-based Turkmen.news reported on March 18 that a vaccine made by Beijing-based Sinopharm was being offered to the elderly. Earlier in March the site reported that teachers had been told they would soon be offered shots. China claimed it had delivered a batch of the Sinopharm vaccine on March 6. There is no indication the state has approved its use.

Uzbekistan launched its vaccination campaign on April 1 with both the AstraZeneca shot received through Covax and the ZF-UZ-VAC 2001 vaccine made by China's Anhui Zhifei Longcom Biopharmaceuticals. By April 6, 35,000 people had received a shot, RIA Novosti reported. Uzbekistan is the only country in the region to extensively cooperate with China, conducting third-phase trials of the Anhui Zhifei Longcom jab over the winter. One million doses reportedly arrived in Tashkent on March 27. Uzbekistan plans to start bottling ZF-UZ-VAC 2001 in May or June. First Deputy Minister of Innovative Development Shahlo Turdikulova has said that she and her family were vaccinated with ZF-UZ-VAC 2001, which requires three shots over 28 days. A survey conducted in late March on the Telegram instant messaging app found 44 percent of respondents would refuse vaccination.

For several months during the initial outbreak, we chronicled daily news from across our coverage region. See our previous coronavirus dashboards here.