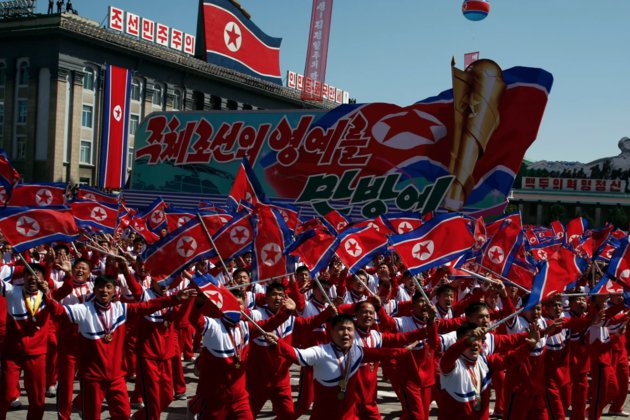 PYONGYANG, North Korea - Marking its first major public event since taking on a diplomatic approach in dealing with the U.S., North Korea marked the 70th anniversary of the Day of the Foundation of the Republic on Sunday, in an unusually toned down fashion.

Over the last few decades, North Korea has traditionally marked the anniversary of its foundation - which is one of the country's most important holidays - with a display of its military might, this year, the country chose to prioritize its economic development.

Each year, when the reclusive nuclear nation marks the day the Democratic People's Republic of Korea was proclaimed, the country celebrates by staging art performances, holding exhibitions and athletic events - but the most important part of the celebration is its dramatically staged military parade.

The parade is viewed closely by several nations and experts as it has often provided an insight into the weapons advancement achieved by the country that has intensified its nuclear weapons programmed at shocking speed, spooking several rivals and even challenging world powers like the U.S. that are closely allied with the nation's traditional enemies.

However, this year was different, since it was the country's first such massive public parade since the North Korean leader, Kim Jong Un made diplomatic overtures to its southern neighbor after 65 years of armistice and with its neighbor's close ally, the United States.

Kim Jong Un offered to denuclearize, but made it clear that the country's wasn't threatened by South Korea and the U.S. into taking the action - but was changing its approach in a bid to boost its economy that has suffered due to decades of crippling sanctions.

Since he first vowed to denuclearize during a historic meeting with the South Korean leadership earlier this year, Kim Jong Un repeated the same vow during his meeting with the U.S. President Donald Trump in June this year.

Despite the rocky path that both the countries have set out on since then, Kim Jong Un has reiterated his commitment to denuclearize but is demanding relief from sanctions before making any moves.

The U.S. has demanded actions towards disarmament before providing any sanction relief.

With talks being deadlocked, analysts had expected North Korea to stage large-scale military drills on Sunday, just as it has for several years - with a display of its advanced weapons - especially its Intercontinental Ballistic Missile (ICBM), in a bid to deter powerful nations from considering a strike on the impoverished nation.

However, on Sunday, North Korea staged a military parade which focussed on conventional arms but refrained from showing off its long-range missiles.

The country also prominently focussed on peace and economic development as it marked the 70th anniversary of the country's founding.

At the parade, as tens of thousands of North Koreans filled up the Kim Il Sung Square in Pyongyang, the country rolled out some of its latest tanks and analysts pointed out that nearly half of the two-hour long event was devoted to civilian efforts to build the domestic economy.

Waving brightly colored plastic bouquets, Pyongyang residents, who had been training for the anniversary for months, held up the bouquets to spell out words and slogans that can be seen from the VIP viewing area.

Accompanied by the head of the Chinese parliament and high-level delegations from countries that have friendly ties with the North, Kim Jong Un attended the morning parade.

However, the North Korean leader did not address the assembled crowd.

Instead, the head of North Korea's parliament, Senior statesman Kim Yong Nam addressed the crowd in an opening speech and said that the relatively softer tone for the event emphasized the economic goals of the regime, not its nuclear might.

Nam, who is North Korea's titular head of state, said the country had achieved status as a military power, and would now pursue efforts to strengthen its economy.

He also called on the military to be ready to work to help build the economy.

Units from all branches of the military staged a carefully choreographed march after which the focus switched to civilian groups as groups of nurses, students and construction workers waved out as they marched with colorful floats.

As the parade came to an end, Kim Jong Un stepped onto the edge of the VIP balcony with Li Zhanshu, the Chinese special envoy, who is the third-ranking member in China's ruling Communist Party.