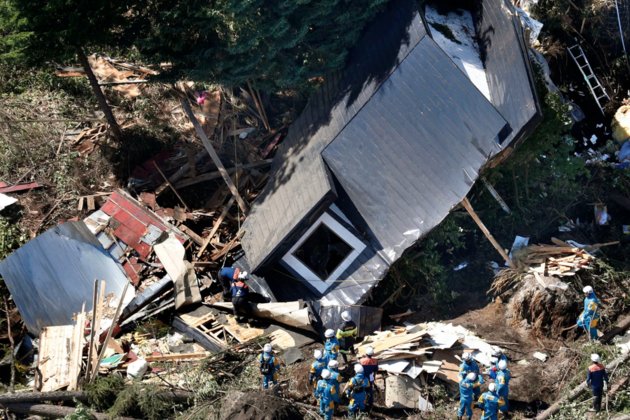 TOKYO, Japan - Faced with a series of back to back environmental disasters, Japan has been trying to recover from the powerful storm that tore through the country, following which, a massive quake triggered landslides.

This week, as rebuilding efforts caught pace, authorities in the country said that the death toll from the quake and subsequent landslides had shot up.

Starting the year with its first 'heavy snow' alert issued in four years, the weather in Japan has followed a predictable pattern but brought with it disastrous conditions that persisted before flipping towards the extreme opposite.

In July, the country witnessed its worst weather disaster in over 36 years, as the torrential rain hammered several parts of the country, causing the death toll from floods and landslides to increase to over 200.

Scores of people were swept away in the floods caused by over three feet of engorged rivers, dozens were trapped under landslides and several others were killed or missing in Hiroshima prefecture.

Less than a couple of days later, Japan faced extremely hot weather and the heatwave that followed set a national temperature record in the country.

However, with water remaining trapped across the region, soon after the deadly floods, and the heatwave intensifying the situation within the country - disease and death soon followed.

Despite efforts by thousands of rescue workers, several people were killed.

Further, the deadly heatwave has also fuelled fears about potentially dangerous conditions for athletes and spectators at the Tokyo 2020 Olympics.

Japan's extreme weather was about to get worse as the country then experienced its strongest typhoon in 25 years, which left at least 11 people dead.

It caused much destruction at one of Japan's busiest airports, which had to close indefinitely as the typhoon flooded a runway and other facilities, while damaging other infrastructure.

Then, less than 24 hours after being slammed by the most powerful storm in 25 years, Japan was struck by a powerful magnitude 6.7 earthquake that triggered landslides and caused a massive power blackout across an entire island.

The U.S. Geological Survey said that a powerful 6.7 magnitude earthquake struck Japan's northern island of Hokkaido at a depth of 24 miles and about 68 kms southeast of Hokkaido's prefectural capital of Sapporo, which is home to about 1.9 million people.

The quake triggered a landslide on the country's northern island, which razed hundreds of houses, left scores of people trapped and injured.

The landslide caused a long ridge in the rural town of Atsumi.

However, the worst effect was the widespread power outages that led to an island-wide blackout, affecting 5.3 million people.

While cleanup operations have continued since then, authorities have warned that efforts to restart and recuperate are taking longer than expected.

This week, authorities said that the biggest coal-fired power station in Hokkaido, which was hit by last week's devastating earthquake, will take weeks longer than had been estimated.

Meanwhile, power shortages on the island were said to be hampering efforts to clear debris and restart factories.

The government has called on residents and businesses to reduce their power consumption by about 20 percent.

Further, officials said that the death toll had risen to above 40 after the powerful quake struck the northern Japanese island.